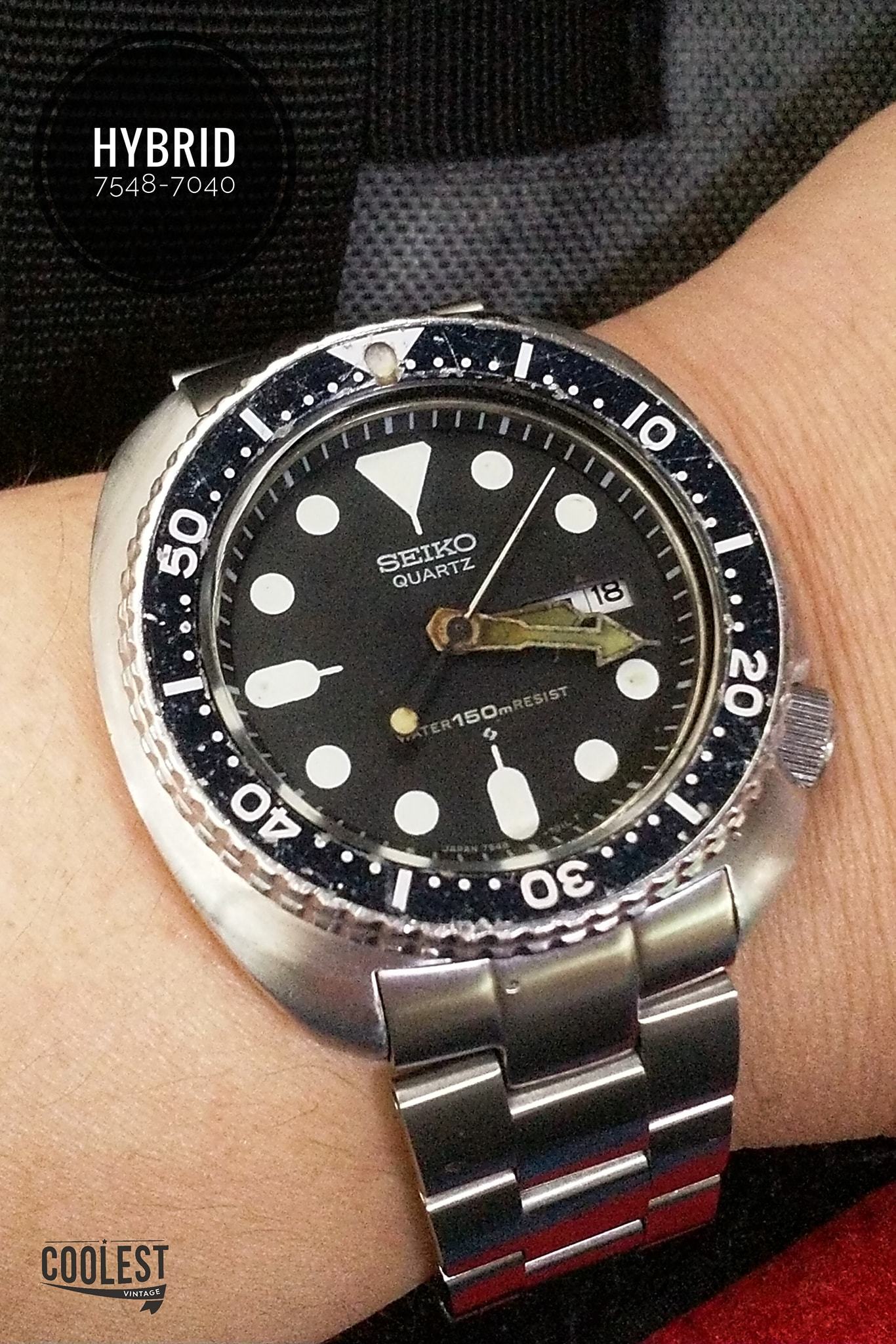 Here's something fun to play with.  Two watches from the same era, one is quartz, the other one is automatic, both are really nice even today.  They have different movements and casing designs.  They are just two very different divers, period.

Despite of the facts above, something can be done to give them a new look.  This is by swapping the movements.  Doing so on the 7548 and 6309, is very easy and straight forward, just open the case, have the crown out, swap the movement (with dial and hands attached), put the correct crown stem back in, and close the case.  Done in 5 minutes max!

There you see, a 7548 movement in a classic 6309 turtle casing.  Comparing with the standard 7548, it is now wider and heavier.  Note this is not an official model, even the model code, was put together by myself, with the first half being the movement code, and the second half is the case code.

Will leave it like that for the time being, and both watches will back to their original states, when I feel like to do so.  It's fun!  The two watches below, are their real identities. 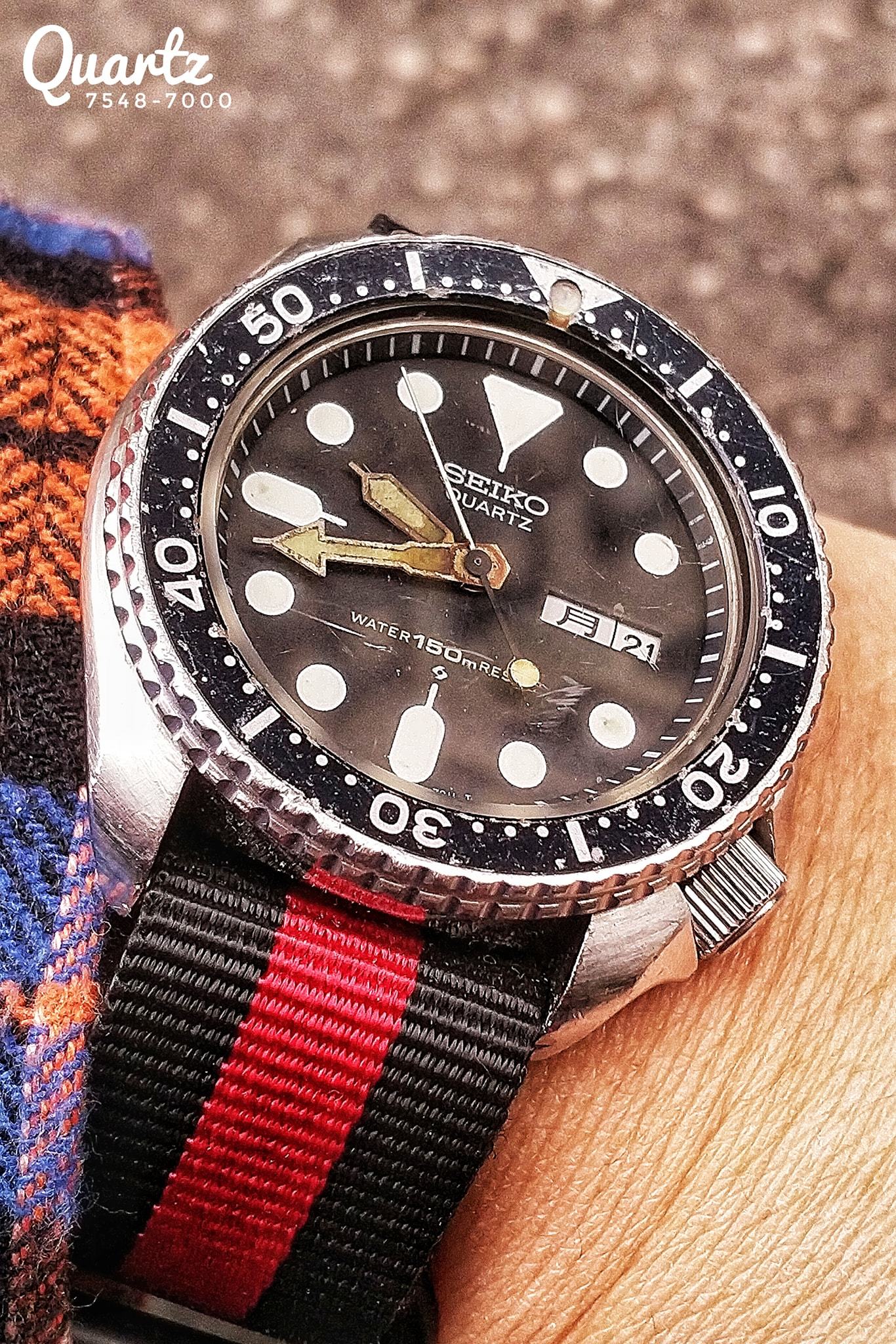 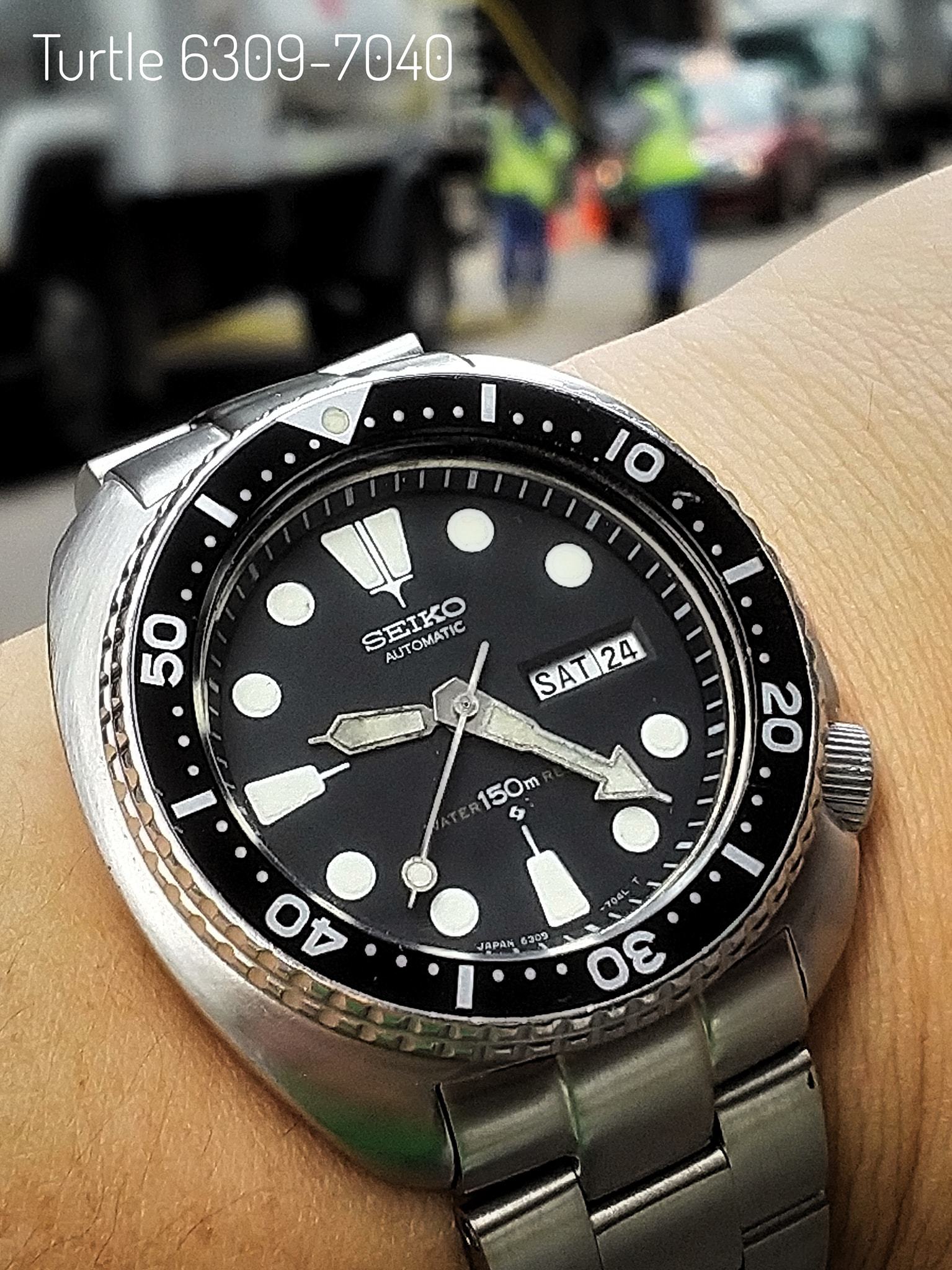 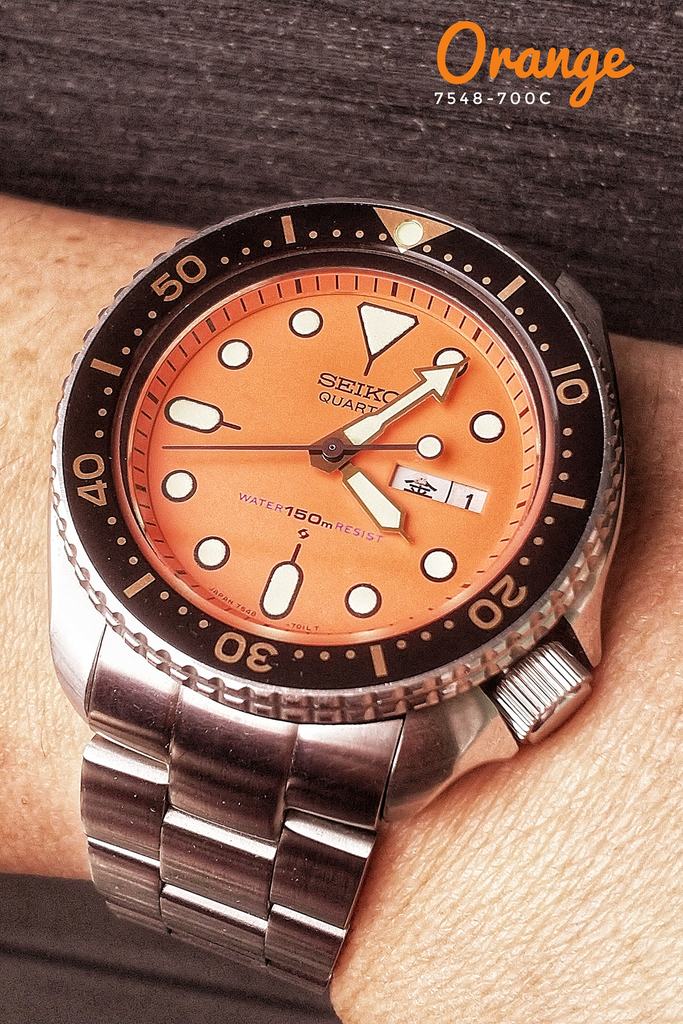 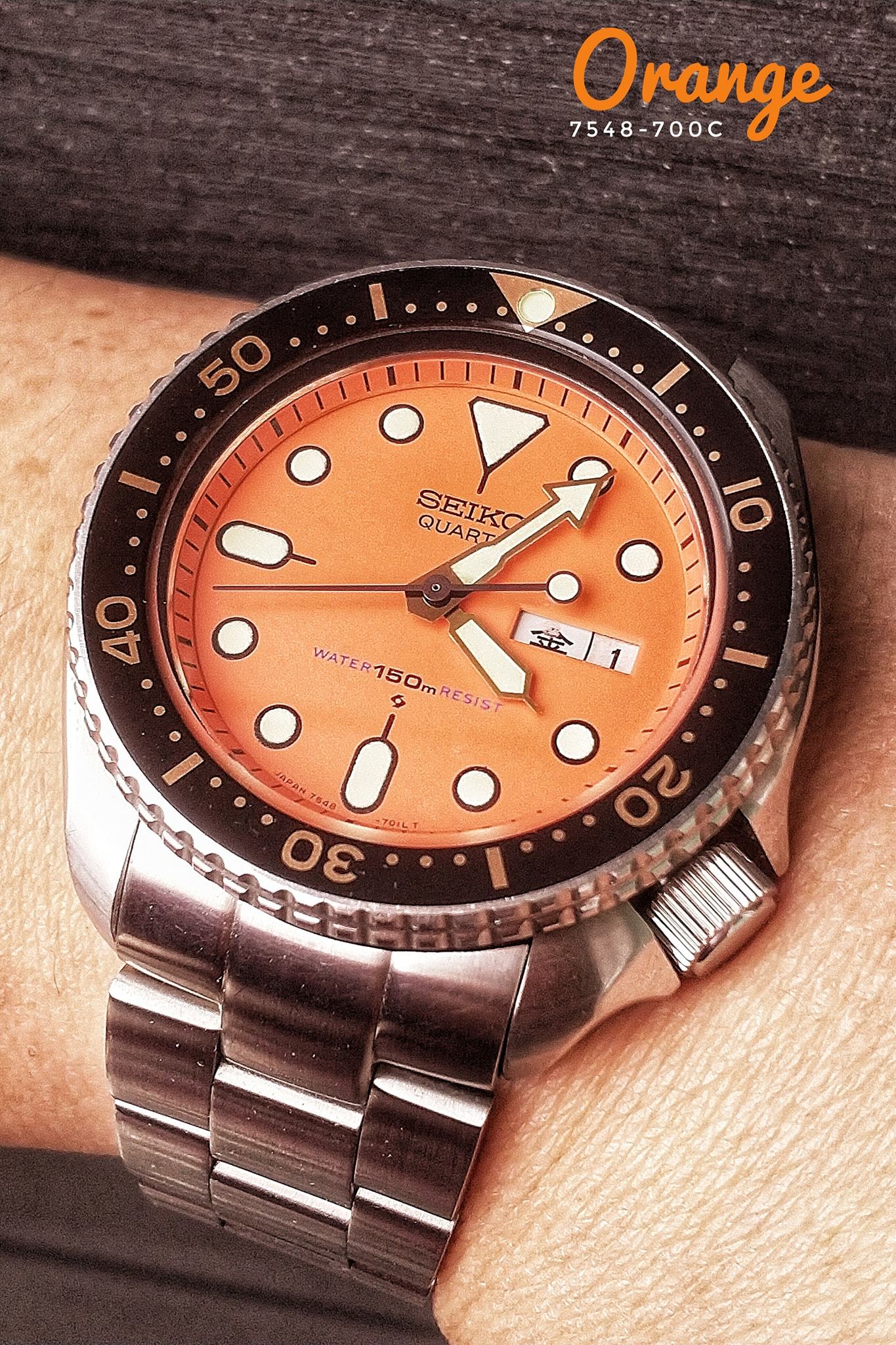 When Seiko released the 7548 in the late '80s, only two models were introduced, the black 7000 and the Pepsi 700B.  Later the years they brought out two extra model with different dial colors, the orange and the green, or sometimes people says it's teal.

For all four colors they offered, I managed to have three.  The orange one shown here is my latest acquisition.  It's from 1981 and was very well kept and maintained.  Different from the other four models, the bezel of the orange have golden color fonts.  I believe the green model might also have the same bezel, but I cannot confirm as it's not in the catalog, and I don't have that yet as well.  The green is the rarest and the most expensive in fact, which easy cost more than some other divers like the 6105, go figure. 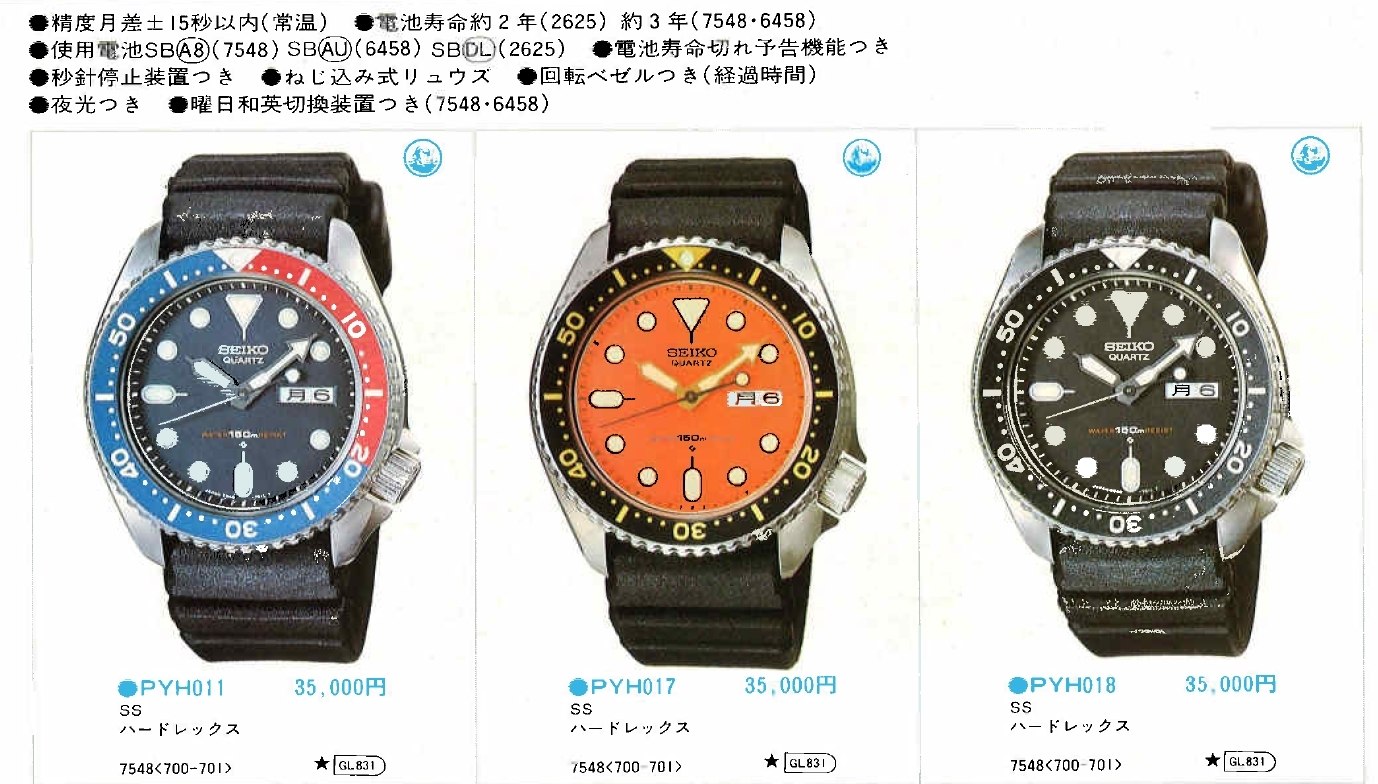 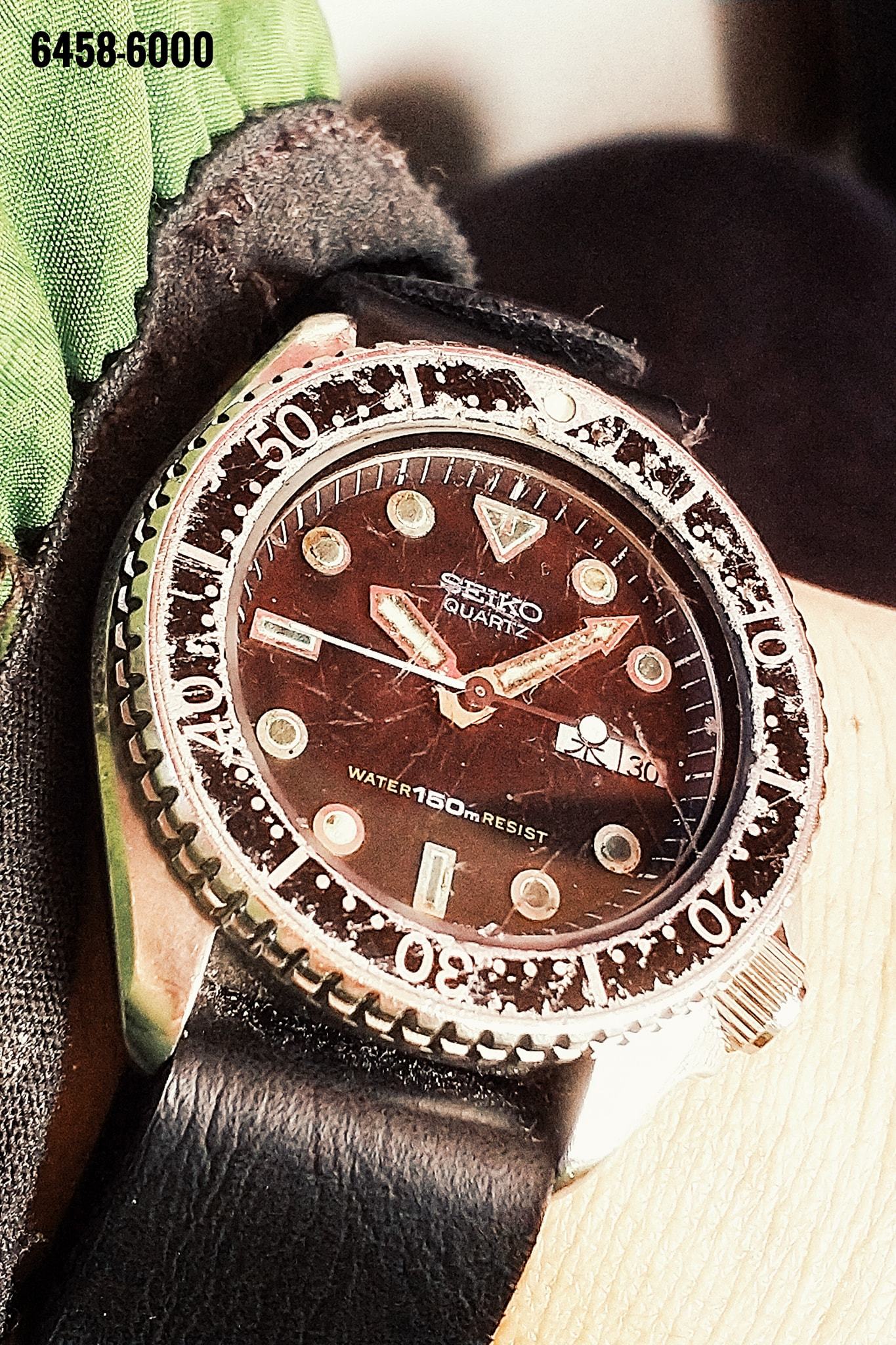 A Less Talked About Masterpiece

The 6458 was the earliest midsize quartz diver Seiko brought out in the late '70s. Just a bit later than they launched the bigger brother 7548.

It came in 4 different models, with mostly the dial color difference.  The black as shown, the orange, the white, and the green.  The are all of the same specifications and were rated 150m Water Resistant.  The one in the photo, which is quite beat up, is a running watch now.  When it first came in, the condition was even worse than it is shown now, and non-moving.  After a very thorough clean on the case inside out, and have the movement serviced by lubricating and rust taken off, it is now running like a beauty, in heart.

Just leaving it the way it looks, it sure did have an exciting history before, then let it keep the scars.

Possibly one of the most short-lived digital diver Seiko had.  Started to appear in the JDM 93 vol.2 catalog, and last appeared in the 94 vol.2. Probably lasted only a year and a half in the market.

The special function of this digital diver, is having a scuba chronograph mode.  Under this mode, it can log data up to 20 dives.  Each set of dive data includes month and date of dive, dive starting time, diving time and number of dives on that day up to 9 dives per day, also provide auto signal of passage time. Other than that, it has 3 separate alarms and and regular chronograph mode.  It also has a rating of 200m under the water.

Originally equipped with a extended nylon straps, that could be worn external to the diving suit.  Now on the Seiko signed rubber for everyday wearing. 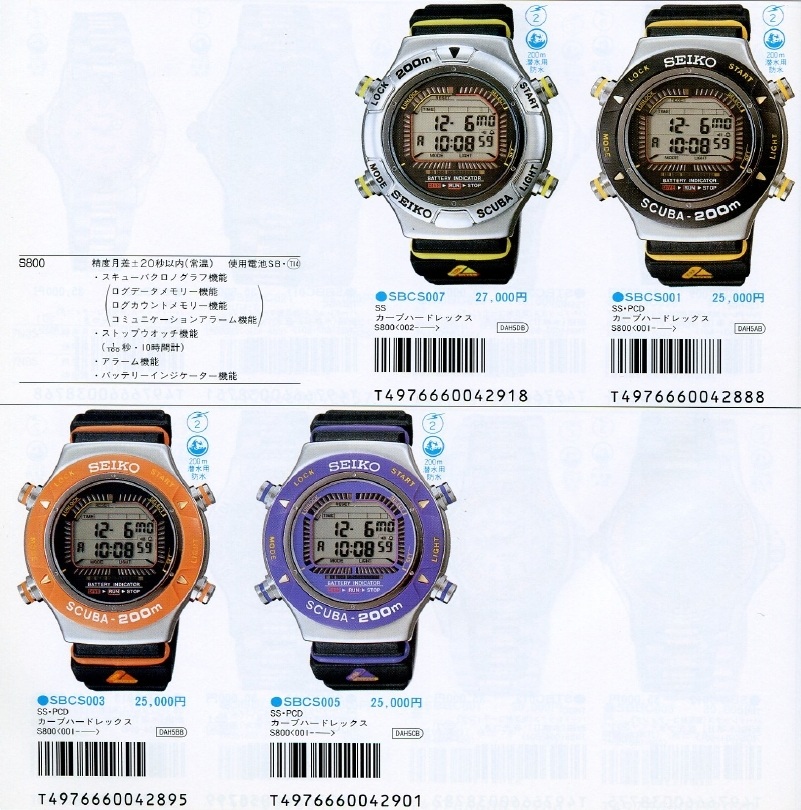 The 7548 series of divers first appeared in the 1979 Volume 2 Catalog, along with two other ladies sized quartz divers as new models.  And also the first time of Seiko to utilize this case design.

It came standard with a 150m rating, with a choice between two colors, black dial with black bezel insert  and blue dial with blue/red bezel.  It came standard only with the rubber strap GL831, where you can see this mentioned on the catalog shown below.  The movement itself is serviceable, as a big portion of it is more or less the traditional mechanical watch design.

The 7548 is definitely my favorite diver of all time.  Later on I will have a specific page made for the 7548, with all the info collected from the internet and links to them.  Plus a good amount of photos that we could know more on this legendary piece that Seiko made, where after 40 years, people still love it and actively looking for it. 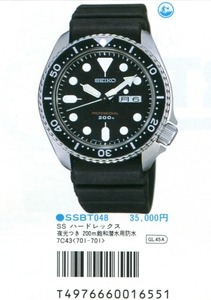 The One That Set The Standard

The 7C43-7000 series was the second generation of quartz diver that utilize this casing.  The first one was the 7548-7000 series.  After an upgrade of the case design on the final version of the 7548, which crown the rating from 150m to 200m, they were then being classified as Professional diver watches. The same case design and water resistant structure, is still being used in today's diver, namely the best selling Seiko entry level diver SKX series, with the same 200m rating.

The new 7C43 movement were first used in 1986, and is proven to be very reliable and durable.  The 7C movements are still being used in today's diver, with case rating from 300m to 1000m models.  Shown here is the early 7C43 from 1988, a Japanese Domestic Model, which has a Kanji day-wheel.  In fact, this were sold worldwide with the same configuration, with just different day-wheel localization. 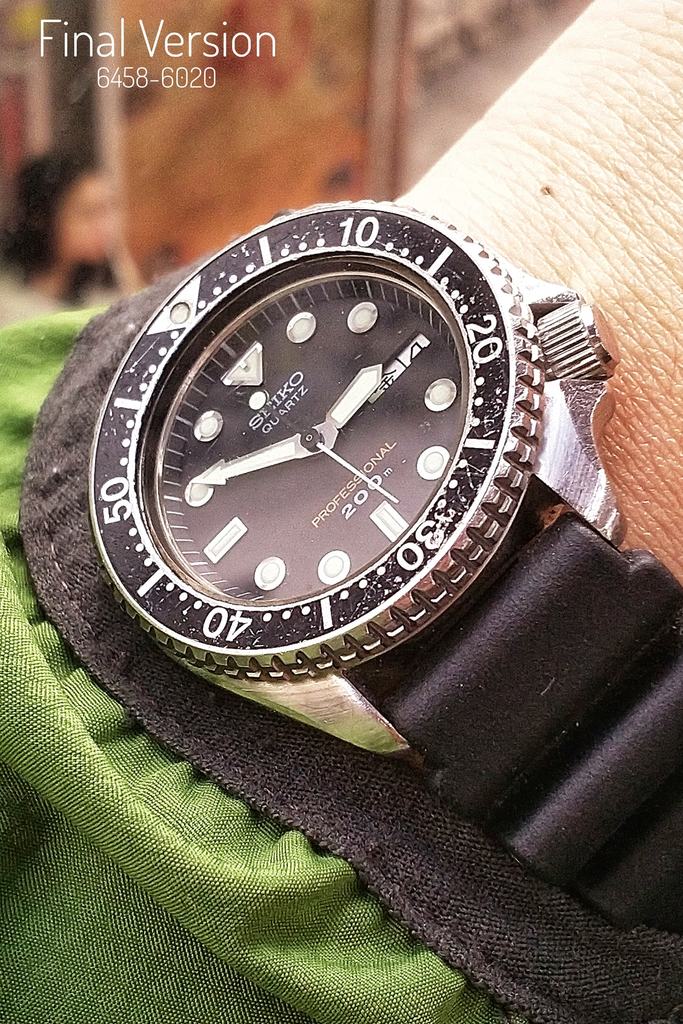 With the success achieved by their first generation mid-sized quartz diver, the 6458.  Along with the bigger brother 7548, both models comes to their end of their model life.

However, before coming out with the new models, Seiko had put them in certain 'public testing'.  With a new design at the case infrastructure and crystal mounting, by using the same movement inside, a semi-new baby is borne.  The new 6458-6020, with a new rating of 200m down the water, crowned as a professional model now.  A subtle change of model to the market, and it didn't last long on the shelf.

In less than a year selling in the store, Seiko introduced a new model with new movement, the 7C43.  Yet, this time they advertised it with a new case design, which in fact was the same design quietly used on the final 6458's.

The limited circulation of this transitional model in the market, made it a Seiko collector's item, and a very reliable professional diver for daily use, even after three decades of usage. 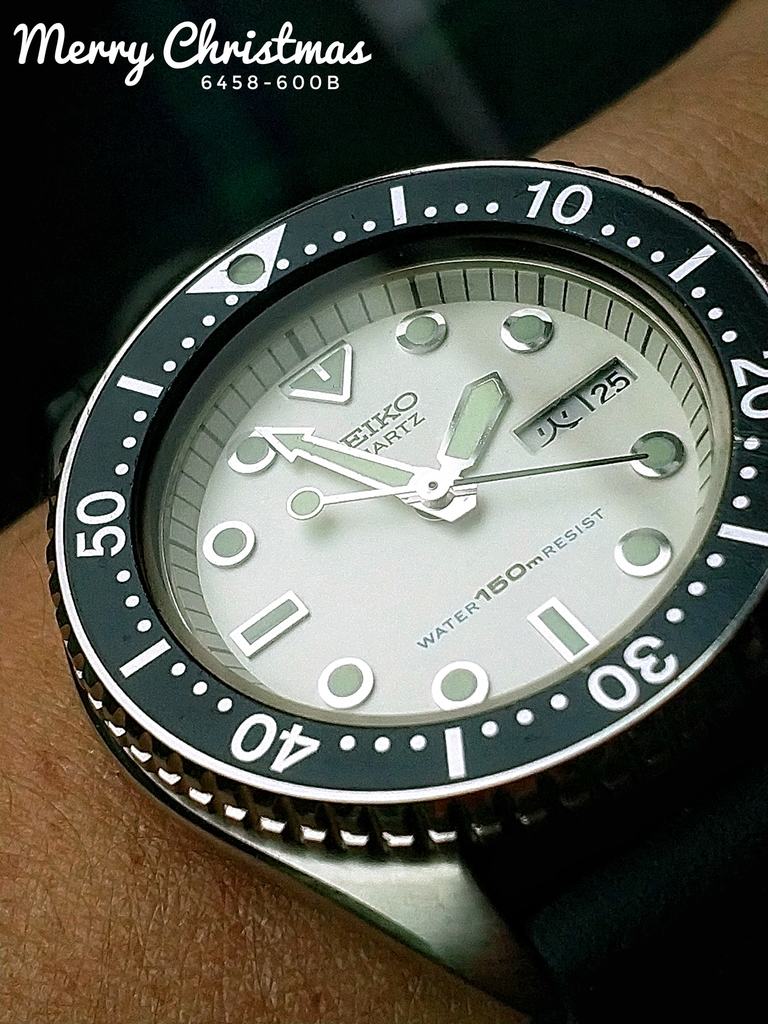 A very well built and defined diver Seiko made in the early days they started their Quartz Divers series.  Some people said this is the baby version of the 7548 divers.  But in terms of details, the 6458 offers more than its bigger brother.

Applied hour markers is one signature of the series, and this exact markers design can still be found on today's Seiko divers.  Only available in this mid-sized series, is the white dial.  The other 3 dial variants, black, orange, and teal, are available on the 7548.  But the pepsi dial is not available on 6458 though.

Definitely my favorite mid-sized diver series.  What I don't have is the teal version, which is super rare and fetch a crazy price whenever one shows in the marketplace.  Will see. 🙂 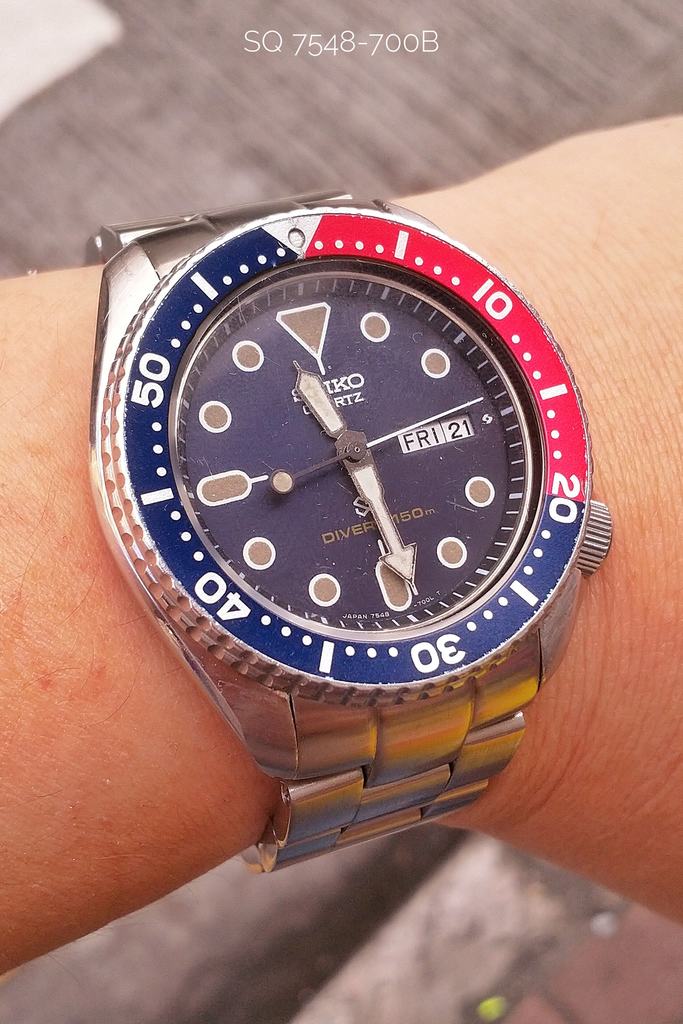 When we talk about diver, there's one brand that always comes to our mind, Seiko.   What's so special about them?  We'll talk about that later.  But today, I'm going to show you the one series that I like the most, the 7548.

From the photo, one may say, what's so special about it.  It looks almost the same as those Seiko SKXs that were being sold on the shelves today. Yes, you are right, They looks so close, but not quite the same.  The new ones are just the grand-grand-grandchild of the one in the photo, in terms of design.

The 7548 is the first and original Quartz diver came out in the late '70s, in this kind of diver casing. Powered by a high-torque quartz caliber 7548, a battery will keep the watch running for two to three years with stunning accuracy.  It was quite a breakthrough back in that time as most divers were still running on automatic calibers.

The 7548 came in 4 different variations on color. Black, Pepsi (as shown), Orange, and Teal.  The Teal tends to be the rarest and yet the most expensive one right now, which cost thousands in USD easily.  The Pepsi shown in the photo, is from 79, an international version.  The SQ marks on the dial shows that it was sold outside Japan.  And this is now almost 40 years of age, and it is still ticking strongly.

Price wise, they went up in price every time I checked with the auction houses globally.  Get yours, while they are still attainable and affordable.